Three primary school pupils have been rewarded for putting their best foot forward after completing a challenge centred around active travel. 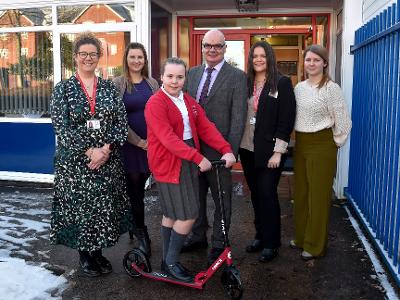 St John Vianney Catholic Primary School and Longton Lane Primary School - which will both sit on a key active travel route running from Lea Green to Whiston Hospital - were invited by St Helens Borough Council to take part in an initiative which tasked children and young people with walking, cycling or scootering to and from school to virtually reach the North Pole - approximately 2,533 miles away.

In total, 63 pupils took part in the challenge with their parents and carers over a two-week period - resulting in more than 600 miles covered between the two schools, with Year 5 St John Vianney pupil Kitty, and brother and sister, Joseph and Arwen from Longton Lane Primary School, clocking the most miles, 17.6 and 52 respectively [Joseph and Arwen walked 26 miles each].

As a reward for their incredible efforts, the trio were presented with micro scooters, kindly donated by Merseyside-based Flinders Chase, who are working with the council on the active travel route to link Lea Green with Whiston Hospital - one of a number of schemes planned or underway in the borough to encourage residents to consider greener forms of transport to improve health and protect the environment.

Councillor Bowden said: "Generally, children and young people don't have that far to go to get to and from school, so encouraging active travel though initiatives like this is a great way to gain interest and change habits which in turn can reduce congestion and emissions around schools, while promoting a healthy and active lifestyle.

"Congratulations to our winners Kitty, Joseph and Arwen - they should be very proud of their achievements - and a big thank you to Flinders Chase for providing such fantastic prizes which are a great incentive for these youngsters to continue choosing active travel as a means of getting to school - in style as well."

Meanwhile, St Helens Borough Council's commitment to ensuring active travel remains at the centre of all major road and infrastructure developments has received a boost after it was announced that the council will receive £191,000 from a £1.4m funding pot secured by the Liverpool City Region Combined Authority from the government's Active Travel Capability and Ambition Fund to help councils develop better designed walking and cycling schemes.

Councillor Bowden added: "As a council, we are looking to set the benchmark on how active travel should be done, making sure it is a key component in ongoing and future projects.

"You've only got to look at the works going on down at Lea Green Railway Station, which will see Merseyside's first CYCLOPS junction - on top of several new walking and cycling routes from Lea Green - to understand our level of commitment to ensuring the correct, safe infrastructure is in place for people to consider cycling and walking as an alternative to driving for short journeys, and we will use funding available to us to further strengthen our position to play a key role in the Liverpool City Region's ambition to kickstart an active travel revolution."