Getting the most out of opportunities to improve transport across the wider St Helens, Wigan and Warrington areas was the key topic as part of a Strategic Transport Meeting. 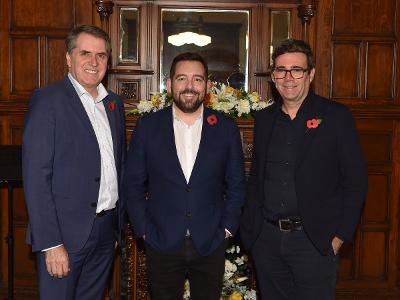 The meeting held on 4 November at St Helens Town Hall was the latest in series of discussions between the region's leaders on the unique opportunities that the three boroughs can bring for collaboration on public transport and infrastructure projects.

These include investments along the M6 corridor between all three boroughs, aligning active travel plans to promote greener ways of travelling across borders to access large scale economic development sites such as Omega and Parkside, and how combined authorities' bus franchise schemes could interact in places like St Helens where the two different schemes will cross over.

Councillor David Baines, Leader of St Helens Borough Council, said: "One year on from our initial meeting and there has been a great deal of progress for all involved such as the £2 limit for any bus journey being rolled out across both the Liverpool City Region and Greater Manchester alongside the continuing development of infrastructure improvements across all three areas for the benefit of residents and businesses.

"Our three boroughs see the benefits and challenges of cross-border transport developments, something that not all areas regionally experience. Working together we will continue to look at how to maximise the opportunities for joint working while taking into consideration the impact on our neighbours.

"I am extremely grateful to Mayor Andy Burnham and Mayor Steve Rotheram and colleagues from Wigan, Warrington and regional transport organisations for continuing to focus on the specific issues and opportunities that the cross border relationships in our three boroughs bring with them."

Steve Rotheram, Mayor of the Liverpool City Region, said: "Tens of thousands of people in St Helens rely on public transport to get about every day. It's a vital lifeline. Yet for far too long, far too many people in our area have had to put up with a broken, fragmented transport system that simply doesn't work for them.

"As Mayor, I'm working hard to put that right by investing in improving infrastructure across the entire city region. Working with Councillor Baines and colleagues in St Helens, I want to build a London-style public transport system that makes getting about quicker, cheaper, cleaner, and more reliable for everyone.

"We've taken some significant steps towards that goal over the last 12 months, with local leaders unanimously choosing franchising as the preferred option for the future of our region's bus network - helping us to put the 'public' back in public transport. Alongside our investment in a fleet of new publicly-owned hydrogen buses, we've recently introduced our new £2 bus fares to make it cheaper for people to get from A to B - and have frozen the cost of a MyTicket at £2.20 until 2025, giving young people unlimited daily travel across the city region.

"We've invested £42m in active travel infrastructure too, including the new £15m CYCLOPS junction near Lea Green and other upgrades around the station to help offer people a quality alternative to the car. The more we can do to reduce congestion on our roads, the more we can improve our carbon footprint and the quality of air we all breathe - and smash our target to be net zero by 2040. This is only the beginning of our journey to build a healthier, cleaner Liverpool City Region."