Community safety partners report on a year of action

Partners of the Safer St Helens Executive are reflecting on the second year of action and the challenges that lie ahead for the body, with the publishing of its annual report. 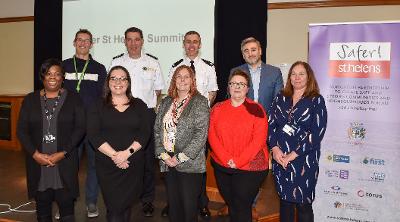 The Safer St Helens Executive was formed in July 2020, with the endorsement of the St Helens People's Board. It provides the multi-agency forum for all community safety agencies to deliver the priorities that will prevent and reduce crime and disorder across the borough.

During the last year, the Safer St Helens Executive saw a number of successes.

Parr-ticipate offered local community groups funding to deliver targeted programmes in the Parr neighbourhood that would have a direct impact on reducing ASB. In total £38,000 of funding was allocated to community groups.

Outreach work continued in key areas of the borough where anti-social behaviour has been reported, including St Helens Town Centre, engaging with young people and speaking to residents about their concerns.

The report highlights a number of challenges that remain for the executive.

Domestic abuse remains a key challenge for the borough with over 4859 recorded incidents of domestic abuse in 2021/22 and 1650 referrals into the Safe2Speak service for Independent Domestic Violence Advocate support (IDVA) during the same period.

And in the same year, the need for a co-ordinated response to tackle violence against women and girls emerged as both a national and local priority. Further work is planned for 2022, including an online survey via social media of women and girls to understand their experiences, particularly of the night-time economy - which itself will be the subject of more focused work - and to improve the service response to increase confidence and safety.

Meanwhile, the Community Safety Partnership continues to work together to tackle incidents of hate crime in the borough and to build the confidence of residents to report hate crime incidents. Efforts to address hate crime and promote inclusivity include the strengthening of the #BetterThanThat social media campaign and a successful St Helens Pride event in July.

Though the partnership priorities are data led and informed by crime and disorder figures, the executive also commissioned the Safer St Helens Survey to capture residents' feedback and perceptions of safety.

90 per cent of respondents said they felt safe or fairly safe in the area where they live during the daytime, while 46 per cent of people felt unsafe at night.

In a foreword to the report Councillor Jeanie Bell, Chair of the Safer St Helens Executive and Cabinet Member, Safer, Stronger Communities, said:

The executive has grown in strength and partnership and the activity delivered within this report demonstrates how we are more effective working together to prevent crime and tackle disorder in the borough.

"From our work in providing visible and accessible outreach services to co-ordinating our response to domestic abuse - this partnership has demonstrated a commitment to tackling the key harms that impact our communities.

"Significant challenges remain in addressing violence against women and girls, making our night-time economy a safer place to be and in responding to the concerns that our residents highlighted in our recent Safer St Helens Survey.

"We have commitment from not only our statutory agencies and partners, but from local community groups that share the same vision and commitment to work with young people, support survivors and improve our borough.

"I look forward to another successful year in building safer, stronger communities together."