Local NHS hospital workers and a former politician have been recognised for their services to St Helens after officially receiving Honorary Freedom of the Borough status. 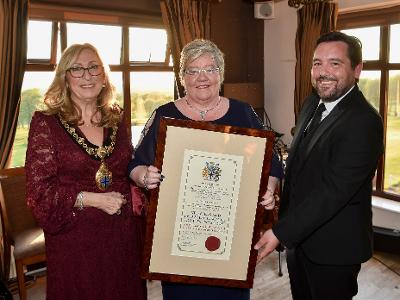 The motion was brought forward to salute dedicated hospital staff that work tirelessly for the health of patients in their care, not least during the coronavirus pandemic, while paying tribute to former council leader and MP for St Helens North, Dave Watts - who was made a lord in 2015 - for 40 years' public service to the people of St Helens borough.

Presenting the scrolls at the Mayor of St Helens Borough's recent charity ball at Houghwood Golf Club, Council Leader, David Baines, said: "Freedom of the Borough is the highest honour a council can give. The list of previous recipients is distinguished, from the first in 1896 - Colonel David Gamble, to Lord Pilkington, Lord Evans, Willowbrook Hospice, St Helens Rugby League Club, and all our service men and women past and present.

"On the 14th of April 2021, council resolved to confer the title of Honorary Freedom of the Metropolitan Borough of St Helens on another two worthy recipients: Lord David Watts and St Helens and Knowsley Teaching Hospitals NHS Trust.

"Lord Watts has served our borough impeccably for decades, as a councillor, council leader, member of parliament, and now as a member of the lords. He has always put our communities first. And I can't think of many other things that make me more proud of our country than our National Health Service and the amazing people who deliver it day in, day out.

"This is the first opportunity following lockdown that we have had to present Lord Watts and our local NHS Trust with their Freedom Scrolls, and I'm delighted to be able to do so."

"I would like to convey my most sincere thanks to St Helens Borough Council for awarding our Trust this very special accolade which we are truly grateful to accept. The admiration for our staff from our local communities is well deserved.  They continue to be an inspiration to all those they care for, as well as their families, and I am extremely proud that their bravery and sacrifice during the pandemic has been recognised in such an incredible way."

Dating back to the Middle Ages when Freeman had commercial privileges and a route into a position of power in a town or city, Freedom of the Borough is the highest award that a council can bestow.